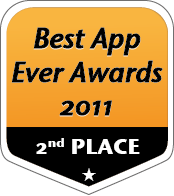 This puts Note Monger ahead finishing better than Evernote, Opera, WeatherBug, SplashID, Stitcher Radio, Quickoffice, Taptu - runner up to ShopSavvy Barcode Scanner.
The numbers are impressive: nominated and voted by users from all over the world. More than 7000 apps ranked by 1.5 million participating votes. We’re honored. Massive thanks to you, our users, for your support. Thank you!
No comments: